This was my first visit to Charlottesville, Virginia, so I was up for anything that involved trying out the local Craft Beer scene.  I only had 2-hours and lots of ground to cover.  I stopped at a gas station and asked some locals where I should head.  More than a few of the patrons suggested South Street Brewery (Map) as a great one stop shop, so I jumped back in the car and we were off.  Needless to say, I was not disappointed. 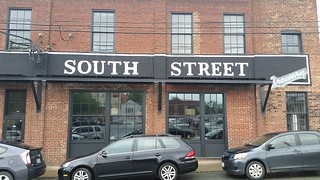 It didn’t take all that long to get to the taproom, but parking in the area is a challenge: Be prepared if you don’t want to hoof it. I arrived just around lunch and didn’t have a reservation but it didn’t take long to get seated. Before I had even plopped we were down greeted by my server, Jordan.

Jordan was exceptionally helpful as well was intimately knowledgeable of South Street’s beer and food menu. His vivid descriptions left little room for imagination and made selection of brew and bites simple.

After placing my order, Jordan skedaddled off and I had a few moments to sit back to crowd watch. The setup of the restaurant included a rather larger fireplace in the center of the room that kept the taproom area somewhat separate from diners. I was sitting in a booth in the corner that gave me a higher point allowing me to overlook seating area, taproom, and brewery. Despite the larger lunch crowd, it was easy to carry on a conversation without having to scream. In fact, I could barely hear the table next to me which was rather nice. Before I even had a chance to finish perusing the crowd, Jordan was back with our drinks.

Though time was short, I was able to try several brews, including the Acoustic Kitty Double IPA; Seriously, that’s what it’s called. My wife was so intrigued by the name that we pulled Mitch the brewer aside and asked about its origins. Mitch told us that the name is from a covert Cold War era CIA plan to put listening devices on cats and send them into the Kremlin in order to gather intel. Sweet. He had me at “Cold War,” and my wife at “Kitty.” Great marketing. 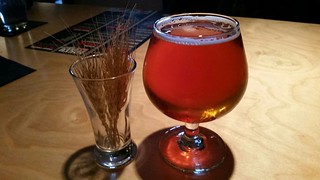 The Acoustic Kitty was a nice and not an overly powerful DIPA. I could have stuck with it for the duration but decided to try The Roux, Roux Roi, My Personal Helles, and Hop Grove as well. My traveling companions had a few other selections and that allowed us to sample most of their offerings in very short order. Life was good and all in all South Street has excellent beer across the board, including the a nice fresh IPA, decent sours, and innovative stouts.

As I mentioned, South Street isn’t just a brewery. It is so much more. Suppose I was not in the mood to have a beer, I would still visit their restaurant for the food. Wow! is all I can say. Their Asian Pork Wonchos, Imperial Chicken Club, Vegetarian Garden Wrap, and 3 Cheese Mac n’ Cheese. All divine and beyond expectations. This isn’t your typical pub food by a longshot. The food is delicious, filling, and more than the average person should be able to eat in a single sitting: Leftovers! Schwing! The price is great to boot.

I wish I could have spent more than 2-hours getting to know the folks at the taproom, but time was fleeting and before you knew it, we were off. I don’t know when I’ll get a chance to stop by again, but it is definitely on my list of favorite spots to grab a bite and brew….or 2 or 3. 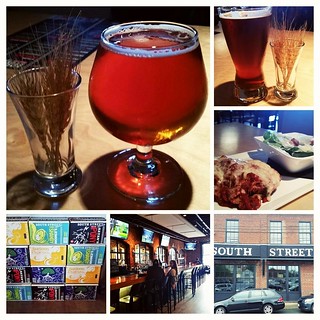