In the Charlotte, North Carolina area, there are no shortage of craft beer breweries. You can pretty much find any type of beer to quench your pallet within a few miles of your home.

The D9 Brewing Company is on the northwest side of Mecklenburg County off of Lake Norman in the town of Cornelius (Map). That’s about a 30-minute drive from Uptown Charlotte. It isn’t the only brewery in that part of the county, both Ass Clown Brewery and Primal Brewery are a hop, skip and jump down the road. 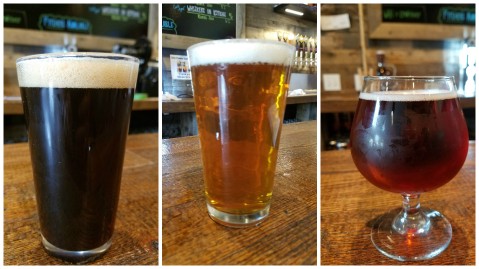 Like most Charlotte-area breweries, D9 has an exceptional tasting room complete with tables, games, music, and other various flare. They have most of their brews on tap at any given time, but if you have a particular favorite, you should call ahead to chat about the availability.

What makes the D9 tasting room great is the staff. I have visited on two separate occasions and have had the pleasure of chatting with Jackie on the first go around and Brie on the second. Both times, the joint was a bit crowded, but Jackie and Brie took their time explaining D9’s selection in vivid colors. All to often I have visited locations that that have less than stellar servers, so being able to talk beer with folks who know their stuff is an added bonus.

Personally, I lean towards the higher non-IPA octane varieties. D9 has a great selection, including an Imperial Black Ale that comes in at 10% ABV and an unclassified sweet experimental that taps in at 13%. On my second trip, their selection of the higher ABVs was a bit scare so I moved over to the IPAs and tried the 7% Battle Hymn Black IPA and the 6.6% Hakuna Matata.  Both brews were exceptional and a must-try for IPA fans.

My real draw on the second visit was the collaboration Imperialistic Red IPA that D9 did with Fortnight Brewing Company out of Cary, North Carolina. Fortnight specializes in English-inspired ales and that influence was evident in their 9% Imperialistic Red. The medium body IPA pours amber and you immediately smell and taste the pine / caramel flavor. Get it while you can. There is so much going on with that drink it is worth a try.

D9 is a great place for the whole family, including your four-legged friends.  They have ample indoor and outdoor seating, games for all ages, and of course a variety of beers on draft to choose from.  They have flights for sampling; Crowlers they can fill to go; and they will fill up Growlers from other locations.  D9 offers a variety of wines, a nice menu of food items, as well as a selection of swag and bottled beers in 4-packs if you want to take the fun home with you (Menu).

D9 is a great option for any craft beer enthusiast.

.@rockhillbrewingco in Rock Hill, SC ~ right next to Millstone Pizza is open for Business with a nice selection of their Craft Beer varieties and some enhanced sanitization programs to keep the place in tip top shape. #CraftBeer #SCBeer
Another Charlotte Metro favorite is up and running. @legalremedybrew in Rock Hill, SC has food and brews and a very nice social distancing setup. Great fun for the whole family #CraftBeer #SCBeer
Practicing social distancing, but open to serve. The @triplecbrewing in Charlotte is open for business with both inside and outside seating. #BeerWeLove #NCBeer #CraftBeer
Getting to enjoy the @cigarcitybrewing Florida Man Double IPA. Got this at @theofficecbk Restaurant in Indian Land, SC. #BeerWeLove
August 28, 1963 ~ As Dr. Martin Luther King Jr. neared the end of his speech on the steps of the Lincoln Memorial, a Gospel Singer by the name of Mahalia Jackson shouted to him to “Tell them about the dream, Martin!” He paused and improvised the remainder of his speech, including the famous phrase, "I have a Dream." #BlackHistory #CivilRights #MLK #IhaveaDream #SCSGBoots
Since its first flight in 1956, the U-2 had become the United States’ most effective tool for peering behind the Iron Curtain. But on May 1, 1960 Francis Gary Powers was shot down while flying a U-2 spy plane over the Soviet Union. He was arrested by Soviet authorities and convicted of espionage on August 19, 1960. #MilitaryHistory #ColdWar #SovietUnion
August 17th is #BlackCatAppreciationDay, a day that aims to dispel all the myths surrounding black cats. Coincidentally the very first Shoulder Sleeve Insignia patch in the United States #Army was designed by the 81st Infantry Division which was organized during World War I at Camp Jackson in Columbia, South Carolina. Their symbol is a Black Wildcat. Watch the Story on our #PuppyB's Facebook Page - http://bit.ly/2ZexG3q Remember to consider adopting a #BlackCat today at your local #HumaneSociety #MilitaryHistory #SCSGBoots #BlackCatApprreciationDay #blackcatsrule #catsofinstagram #catslife #princepanther #blackcatsarethebest
August 16, 1780 ~ Continental and Militia forces collide with Cornwallis and Banister Tarleton at the Battle of Camden, SC during the American Revolution #HistoryBites #MilitaryHistory #History #TeamSC
August 15, 1945 ~ Japanese Emperor Hirohito spoke to his subjects via radio for the first time. His message was that the Japanese Empire would endure the unendurable & surrender. World War II had ended. #MilitaryHistory #HistoryBites #history #japan #WW2
August 1944 ~ LTG George S. Patton's 3rd U.S. Army has smashed its way across France following the Normandy breakout & nearly encircled the German 7th Army near Falaise. Can they close the escape route? #HistoryBites #MilitaryHistory