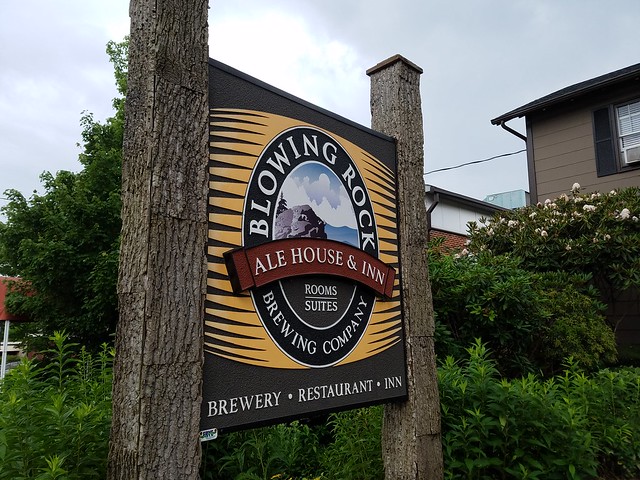 It was my first trip to Blowing Rock, North Carolina, but it was trip I won’t soon forget.

In point of fact I had no intention of visiting Blowing Rock on this trip.  I knew I would pass through this tiny hamlet on my way to Boone, NC for the fourth of July holiday, but I was going to reserve this spot for another time.  Most of what I knew about Blowing Rock was that it is a great spot to visit when you want to escape the mid-summer heat of Charlotte.  After testing this theory for myself I can confirm its authenticity.  The temperature in Blowing Rock was easily 20°F cooler when I passed through just a little over an hour after departing Charlotte; Note to self…must visit here again.

My goal for the weekend was not, however, an escape to a cooler climate, it was to tour around Boone, checkout the scenes, and partake in some of the local craft breweries scattered throughout.   Since there are only three breweries in Boone, I accomplished my intended plan in short order and decided there was time to venture into Blowing Rock which isn’t all that far down the road.  Besides it was on my way home and I knew I would need a pit stop along the way.

After winding down US 321 from Boone, I easily found my way to historic downtown Blowing Rock, which includes numerous eateries, shops, and of course the Blowing Rock Brewing Company located at 152 Sunset Drive.

The town of Blowing Rock with a population of just over 1,200 is a quaint mountain village that could have just as easily been located in Virginia or Colorado or some far place in the Alps.  In many ways the scenery reminds me of parts of northern Italy and Austria with breathtaking views and winding roads.

Nestled at the crest of the Blue Ridge Mountains, the town of Blowing Rock traces its more recent history back to the mid-eighteenth century. The actual history of the area around the town is far older and includes tales of  both Cherokee and Catawba tribes before the arrival of European pioneers.

I’m not sure how much things have changed in Blowing Rock over the years.  Locals would likely say it’s been overrun by tourists and other outsiders.  I’m sure there is some truth to that.  However I can see why folks want to flock here.  The town and the entire area is picture perfect; something out of the storybooks.  Unfortunately the more us outsiders find out about this mountain getaway the more crowded it’s going to get. 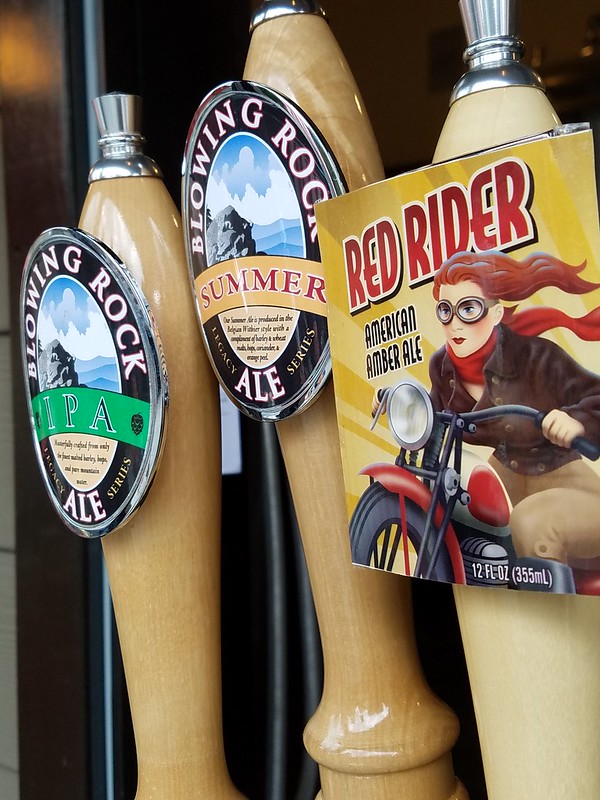 Parking wasn’t all that bad in downtown. In fact I found a free spot on Sunset just outside the main entrance to the brewery.  Considering it was a holiday weekend and the town was bustling with activity this was a good omen for things to come.

The Blowing Rock Brewery itself includes the brewery, an ale house restaurant and taproom, and an inn.  The restaurant menu was impressive enough and included items that would satisfy the pickiest of eaters.  The marinated Portobello Mushroom Sandwich with Provolone and Grilled Carolina Bison Burger both stood out;  But it was the ribs that incorporated one of their craft beers into the recipe that peeked my interest.  Yum!

There was ample seating when we arrived, and the hostess was ready to get us going, but I decided to explore a bit and checkout the place before diving in.

The first thing you’ll notice about the Ale House is the layout.  You can meander and weave in and out of  rooms all quaintly decorated and semi-private.  Each room had a few tables for diners and a very homey feel to it.  The floors even creaked as you moved along giving the place a rustic feeling that added to the ambiance.  You’d almost feel like you were dining at some old country restaurant if you didn’t know any better. 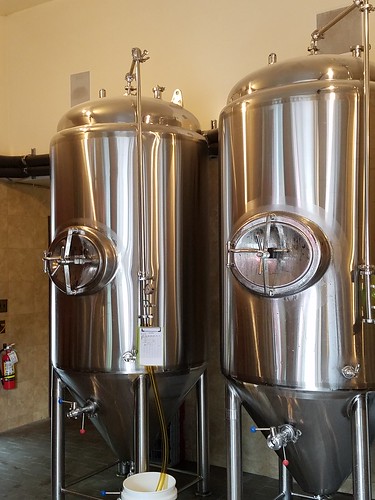 After passing through several rooms, as well as a bar and larger dinning room, we found the rear entrance to the establishment.  There was a steady stream of patrons coming and going, so we decided to take a look.

Just outside the door was more seating and a game area where several folks were playing Giant Jinga  while others were enjoying some pints and looking on.  The actual brewery is in a smaller building just behind the main restaurant.  They had a few brews on tap out back so we headed over and met Josh, the Sales Manager and Brewer Assistant.  He showed me their brewing equipment and gave us a quick rundown of their offerings.

The outside “bar” only took cash so our time hanging outdoors was cut short so we could back inside for some refreshments.  As luck would have it two stools at the bar had just come open, so we decided to get a few drinks there and see where the time took us. 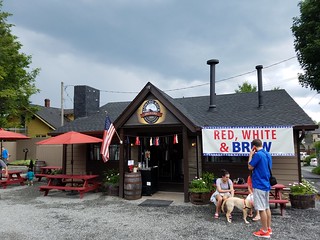 Jordan was serving when we sat down and after explaining their selection she set us up with a flight.  We sipped on that a bit and rapped with her about the local craft beer scene, sites, and the like.  We even met several locals who dished out advice for travels around the area and took note of some great hidden gems for future excursions.

After some great internal deliberations I settled on Blowing Rock’s Belgian Dubbel as my drink of choice for the evening.  It’s both smooth & sweet with fruity and aromatic qualities.  This is a fantastic fully bodied classic ale with a 6.6% ABV.  I like well balanced beers and I will definitely try it again. 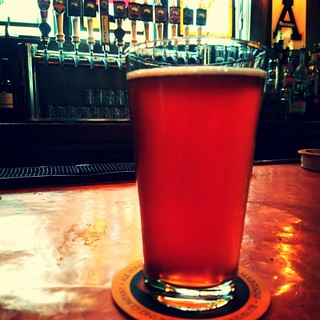 My wife decided to try their Double IPA. This is a stronger ale with some hop aroma and flavor.  A bit bitter for my taste, but she enjoys that style and its citrus taste.  According to her it is “Fantastically done!”  I’ll take her word for it.

Since we couldn’t stay to try more, we decided to order some food to go.  The rack of ribs I mentioned earlier was on special, so ordering was a “No Brainer.”  We picked up a full rack for $22.

We had a beer or two more before it was time to packed up and start the trek back to Charlotte.  Upon arriving home and clearing a spot at the table we immediately took out those ribs and scarfed them down;  They were divine.  The meat literally fell of the bone with minimal effort.

Considering our stop at Blowing Rock was an afterthought and our time there was cut short, I had a fantastic time at the brewery and ale house.  The town was nice and the traffic was hardly noticeable.  Moreover, the brewery and ale house were a wonderful end to a very long day.  Great, people, great service, excellent food and brews, and good times.