The Visit to The Peachoid ~ Gaffney, SC

It’s called the Peachoid, but all it is is a huge water tower just outside Gaffney, South Carolina that only recently came to national prominence.  And, it is where our story began.

A little over four months ago we were taking a road trip to Spartanburg, SC to visit the RJ Rockers Brewing company when several friend, most notably my friend Todd, asked me if we had had the opportunity to see the big Peach. 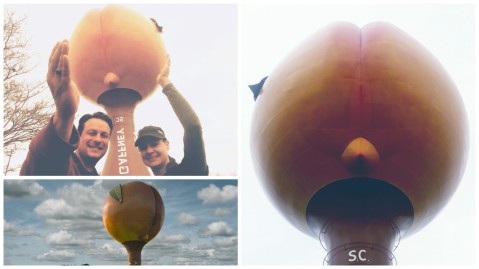 “Peach? What Peach?” I asked

“You know… the big Peach on House of Cards.” Todd replied

“There was a Peach on House of Cards?  The political show?” I still could not recall anything about it, but apparently Frank Underwood, who represents Gaffney in the U.S. Congress made reference to it.

Alright… even if I hadn’t seen House of Cards, the reference to the unique design of the water tower and its similarity to a “butt” was enough to draw me in. I Googled the Big Peach in Gaffney and no less than 100 sites describing the unusual structure popped up: each calling it one of the most recognizable roadside attractions on I-85 connecting Charlotte to Atlanta, Georgia. No doubt.

The Peachoid itself is a 135 feet tall water tower that holds one million U.S. gallons.  It was commissioned by the Gaffney Board of Public Works, built by the Chicago Bridge & Iron Company, and made to look like a Peach by artist Peter Freudenberg.

We entered the coordinates into Google Maps and were off.  I wasn’t sure how close to the highway it was, and I was pleasantly surprised to see it didn’t require that much of a detour.

It is definitely worth the visit if your passing by: If nothing more than to take some fun  pictures to post.

Thanks for the idea Todd.